Nell participated in a challenge on her blog to name 7 fictional characters that she would marry on the spot (this is originally a challenge from another German blogger). I’m always one to fantasize, so I figured I’d just jump in and join the challenge as well.

The rule is that it’s all about the character and not about the actor who portrays him (all men, in my case). I know actors of course do influence my choice because favourite characters lead to favourite actors for me and vice versa. So, actors can not be completely ignored and characters played by my favourite actors are naturally on this list. 🙂

OK, on to the challenge: which 7 fictional characters am I so in love with that I could marry them?

1. I just had to pick a character portrayed by Richard Armitage and I considered Harry Kennedy from The Vicar of Dibley because he just feels so familiar, like I could know him in real life, or John Porter from Strike Back, a tough guy who can think for himself, but in the end I would just go for John Thornton. Ah, the way he and I could change the world together! And he sure can kiss…

2. Nell mentioned Joe Bradley, the reporter in Roman Holiday (as portrayed by Gregory Peck) and I thought I’d pick him too but then I thought of a few other characters Peck played who I wouldn’t mind marrying either. James McKay in The Big Country springs to mind, the quiet Easterner in the Wild West who has such moral fibre and is made of sterner stuff than most people think, and of course Atticus Finch who, in a way, reminds me a bit of my own father. I’ll just go with the Oedipus complex choice and pick Atticus Finch from To Kill A Mockingbird. He’d be a good daddy to my children too.

3. Prince Edward (Richard Chamberlain) in the Cinderella movie The Slipper and the Rose because he was the first character that touched my romantic childhood heart.

4. Patrick Jane (Simon Baker) from The Mentalist because life would never be boring with him around and you know how deeply he can love once he lets you in.

5. Amenadiel (D.B. Woodside) from Lucifer because who wouldn’t want a fierce looking but soft hearted angel at your side to fight for you?

6. Mark Darcy from Bridget Jones’s Diary. Yes, he’s uptight, but underneath all of that… woof! And he’s smart too, changing the world one high profile human rights law case at a time.

7. Captain Frederick Wentworth (embodied most perfectly by Ciaran Hinds) from Persuasion, a self-made man with a faithful heart and I would get to travel the world with him aboard his ship.

Compiling this list, I chose the characters that popped up in my mind quickest and another one of them was John Keating (so brilliantly portrayed by Robin Williams) from Dead Poets Society, so he gets an honourable mention.

I know that makes it technically eight men I would marry and if I think a little longer I could probably think of 10 more (ooh, maybe hotshot lawyer Harvey Specter (Gabriel Macht) from Suits or honourable FBI agent Jack Hudson (Yannick Bisson) from Sue Thomas F.B.Eye or even Charles Ingalls (Michael Landon) from Little House on the Prairie) but I’ll just leave it at this.

10 days, 10 fictional crushes
Post an image of a fictional character who has been or still is your crush. No names or explanations needed. TV, movie, book, comic, cartoon characters are valid.

And so we come to the final listing in this fictional crush challenge. I’ve been listing my biggest crushes chronologically and this is the last one I’ve crushed quite heavily on…

Patrick Jane (Simon Baker) from The Mentalist. I started watching this show because a colleague at the time (in 2011) recommended it. From the first episode that I saw, I was hooked. I caught up to season 3, which was then airing, and from then on faithfully, feverishly awaited each new season and episode. There were to be 7 seasons in total, ending in 2015.

I got hooked on the charm, smarts and devious mind of Patrick Jane (Simon Baker) who helped detective Teresa Lisbon (Robin Tunney) solve murders in California. The former fake psychic turned police consultant used unusual, often amusing, methods (to the exasperation of Lisbon) but was also hell bent on taking revenge on serial killer Red John who had killed his wife and daughter. This juxtaposition of glee and tragedy is what makes Jane such a fascinating character, a man with flaws and all but still lovable. Of course, there’s also the vest (gosh, he looked sexy in his vest!) and the hair and that smile. When Simon Baker flashed that wide Patrick Jane grin I often found myself grinning back at the screen. I swear that smile is the most infectious smile I know.

I made several fan videos about Jane and Lisbon (in those days I used “Hannah” as a pseudonym), they have their own page here on my blog. Looking back at them, there are some I would do differently now but I do have two favourites of the ones I’ve made. The first one, with only season 3 clips, from when I first started watching the show…

At 7 seasons (the last season was half a season, really), the show had run its course, the finale gave Patrick a happy ending (I could also easily have seen it go another way with this character, glad that didn’t happen) and it was a good time to end. Yet somewhere deep down I still miss the show, and Patrick Jane, and his vests, and his grin…

I am so very pleased with how The Mentalist ended! I’m still on a high, days later, thinking about it! I’m walking on sunshine, just as they must be (even though they are fictional characters…)

So sad the show has ended but it’s always best to end on a high, I guess. Still, makes me wonder how their lives will take form from now. So, I guess I’m off to read fanfiction now. 😉

(Beware of spoilers)    On The Mentalist, the Patrick Jane – Teresa Lisbon relationship has been a little angsty of late…

Jane is so afraid of losing Lisbon to the dangers of her job as an FBI law officer that he had to take leave of her for a little bit and figure out how to deal with that. 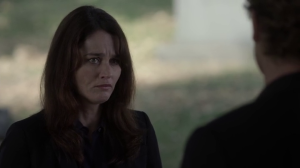 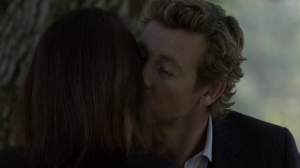 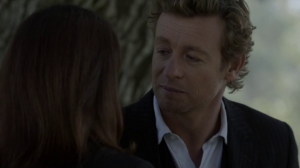 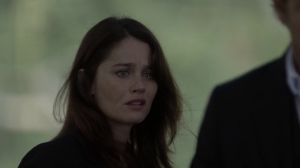 On last night’s episode after some time to figure things out he came to Lisbon on a case and said, “I’m back…” 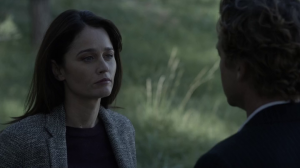 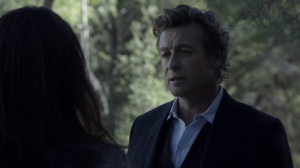 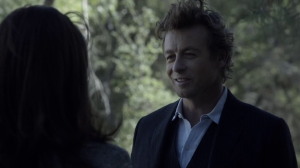 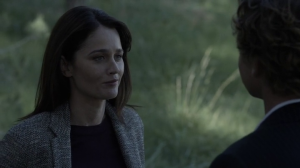 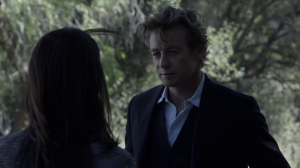 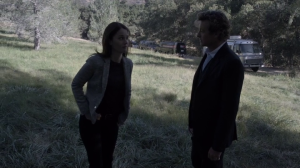 So, he’s back, but how he plans to make it work, we don’t yet… it was straight back to work to try and catch a serial killer…

Next week the show’s finale will be aired in a double-episode. Last ever The Mentalist episodes… 😦 But these spoiler pictures turned up today and it looks like The Mentalist is going out with a (romantic) bang… a wedding!! 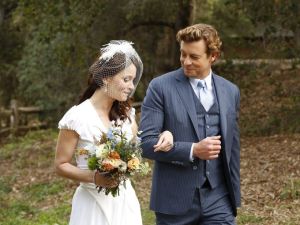 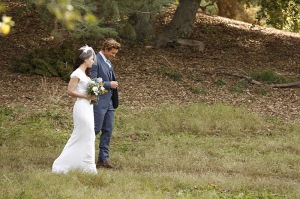 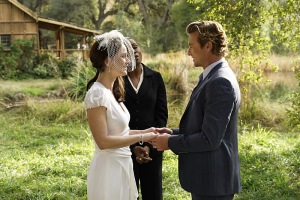 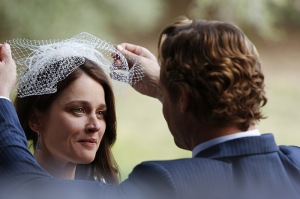 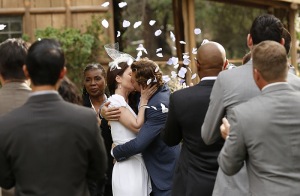 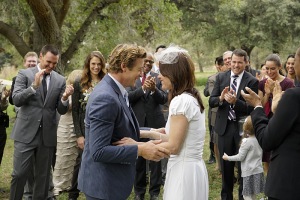 And Teresa Lisbon gets to be in a Patrick Jane – Kimball Cho sandwich! Lucky woman! 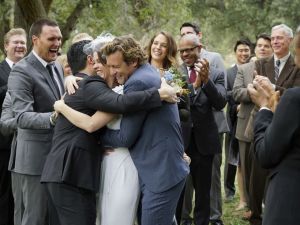 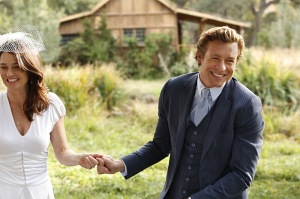 I know not everyone is pro-Jisbon, but I for one am very pleased they will get their happy ending. They soooo deserve it after all they’ve been through… These pictures exude joyous love and I adore them!

I loved this little scene between Teresa Lisbon and Patrick Jane at the end of last week’s The Mentalist episode “Little Yellow House”. I just adore how delicately this whole love story is treated. No over the top rushing into it passion, just a slow buring fire and such true feeling!! With all their history together, this is just the sweetest culmination so far… In this episode he is there for her, never judging, just observing, listening, helping her and her brothers, reassuring her in his Airstream that her brothers really do love her and he gives her space. And then at the end she so beautifully opens up to him and finally tells him she loves him… oh, the beauty of it all! 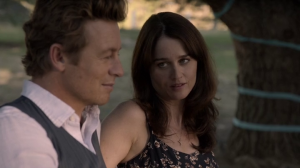 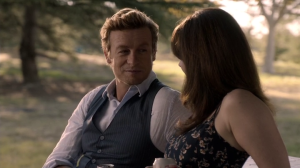 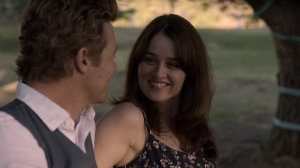 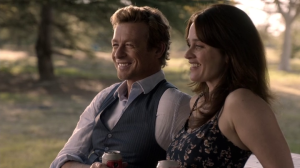