For the past 2 years or so my 16 year old son has been an Eminem fan. It’s almost all he listens to. His fave Christmas gift was Eminem’s newest album Revival. Last summer I finally sat down with him and watched the 8 Mile movie about Eminem, which I really enjoyed! I am no rap fan, but, through that movie, his music grew on me. I’m by no means a real fan, but I can really appreciate some of the music of his that I now know. I especially like this one…

“Now, you really like Eminem, right?” my son said to me after I had seen him roast Donald Trump last fall. Gotta admit, he did grow in my estimation. 😉

Heard some stuff off the new album that I also like, for instance this one, a duet with Beyoncé…

… or this duet with Ed Sheeran…

Anyway, earlier this week I found out that Eminem is coming to The Netherlands this summer! His first concert here since 2003, apparently. Tickets went on sale here at 9 a.m. this morning. Of course, I just had to try and get some and, by golly, it worked! 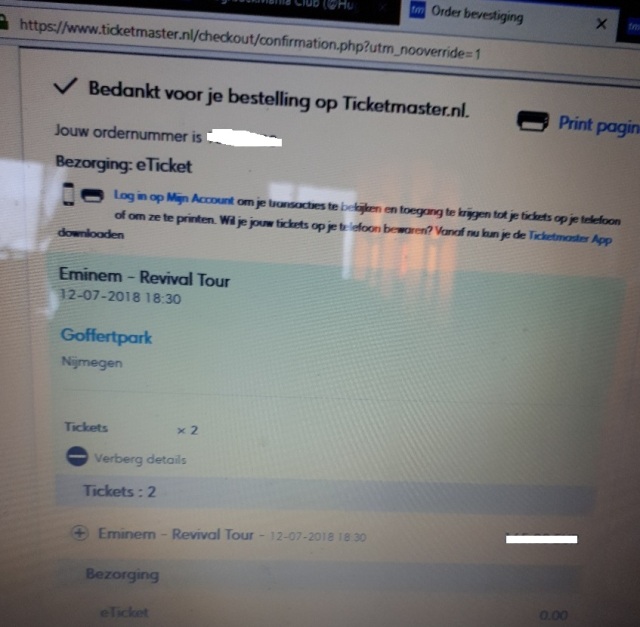 I understand I’m one of the very lucky ones. On the radio they just said that the concert sold out in 20 minutes! My son is over the moon with happiness! I gotta say, once the tickets were purchased for the concert in Nijmegen, I teared up a little because I know how much this means to him… I love making my baby happy…

The only time I have ever been to a concert in the Goffertpark in Nijmegen was when my own dream concert happened when I was 20 and I finally saw David Bowie live! The only time I’ve seen him live, by the way… It’s so very cool that my son will now see his favourite live at the same location! An extra mother-son bonding moment. 🙂 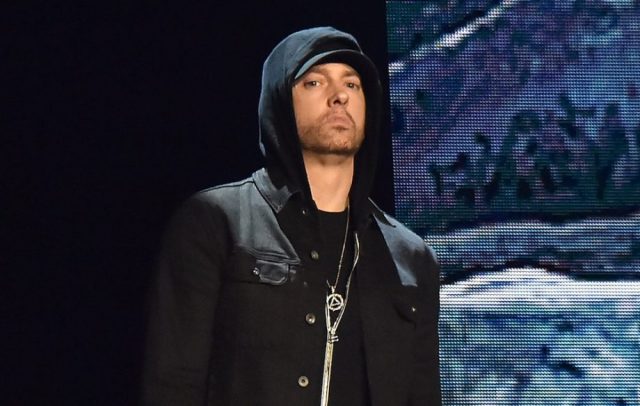 If you’d told me a year or more ago that I’d ever go to a rap concert, I’d have laughed loudly in your face. But here I am, a 47 year old mum (well, 48 by the time I go) off to see Slim Shady live this summer! An old dog really can learn new tricks, I guess… 😉

“Madness, madness, they call it madness! Well if this is madness, then I know I’m filled with gladness!”

Yep, Mr Esther and I went to see Madness live last night, they performed in a quite intimate venue in Utrecht, which made it extra awesome! They are probably most known for their “Our House… in the middle of our street” song. I really like Madness, Mr Esther loves them, so we went and it was a great night out! 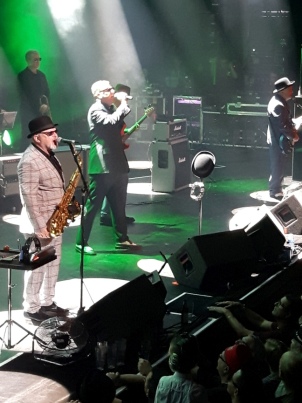 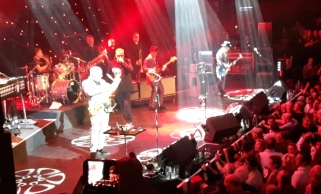 Every time I think of Madness, I am reminded of my wedding when at the party (we had a DJ) Madness was played and Mr Esther and his best friend went all, well, mad! They jumped around like crazy on the dancefloor so that everyone dancing had to make room for them. Last night, sure enough, Mr Esther was jumping up and down again! The man never, ever dances but Madness brings something out in him and he just can’t help himself. I absolutely love that!

I preferred to enjoy the concert instead of documenting it faithfully, so I only made videos of bits of songs here and there that I put together in this one video. Like Mr Esther, I couldn’t stand still either, so the camera is all over the place. The sound is not great either, there’s this recurring static noise that is sadly annoying,  but you get the idea. Songs featured in this video are ‘Wings of the Dove’, ‘House of Fun’ (at 1:46 minutes), ‘Baggy Trousers’ (at 2:47 with a brief glimpse of Mr Esther jumping at 2:57 minutes), ‘Our House’ (at 3:42 minutes, the only song I recorded completely) and ‘Night Boat to Cairo’ (at 6:40 minutes). Mr Esther fervently hoped they’d play ‘Cairo’ and they did that as an awesome finale.

They played a lot of their hits like the ones mentioned above and also ‘Madness’, ‘One Step Beyond’ and ‘It Must Be Love’. That last one suddenly reminded me of one of the first fan videos (with screen caps only) that I had made for Silent Witness, using that song for my Harry & Nikki obsession at the time (I’m still not over them never actually getting together on the show).

The band really was great, the singer Suggs (Graham McPherson) sounds really good live, just like you’d hope for him to sound when you know his records, and it was an upbeat, happy evening all round! Suggs interacted nicely with the audience, even accepting a beer from one of them at one point. There was a little boy in the front row (maybe 6 or 7 years old) wearing big headphones and that boy was interacted with several times, which was cute! Suggs thought the venue looked like the bridge of the Starship Enterprise from his point of view, which was worth a few jokes. 🙂

The only down side I could think of was that the concert lasted only 90 minutes; I wouldn’t have minded another half hour or hour on top of that at least…

“A tear to unite me with those of broken heart;
A smile to be a sign of my joy in existence.”  – Khalil Gibran

The smile: this evening the kids, my husband and I are going to see my favourite band Muse live in Amsterdam! They already played there 2 nights ago, they will play again tonight and they will play a 3rd night as well tomorrow. There are videos on YouTube of Monday’s performance, like this one:

I have already seen them in concert twice a few years ago and loved it. By the looks of it I am going to love it again tonight! I so wonder what my husband and kids will think, they have never seen them live (but know the songs as I constantly play their music).

The tear: tomorrow we go the funeral of my friend’s mother… My friend and her sister incidentally also have Muse tickets, for tomorrow’s show. I wonder if they will feel up to going and if it could help give them a smile on an otherwise hopelessly sad day…