The latest Mach’ was (Do Something) challenge is dedicated to “France”.  What to do with France? Yes, the European Soccer Championships are there now but, while we do watch it, I’m not so much a soccer fan… so, no more references to that! My mind now goes into free association mode… What else do I think of, when I think of France? Well… there’s Paris and the Eiffel Tower… There’s baguette and wine… oh wait, I know someone else who had that association once as well, back in November 2014…

Another association I have when I think of France is Simon Baker. He seems very popular there. Is it because his character Patrick Jane in The Mentalist drives an old citroen?

He also makes commericals for Givenchy…

Oh boy, that smile of his! So joyous, infectious and heart-stoppingly beautiful!

And last week on the Graham Norton show, I saw this French singer (Christine and the Queens) perform and was fascinated! The original is completely in French, but she has translated most of this song into English.

I also think of Edith Piaf, who I used to listen to quite a lot.

And I think of some favourite French movies like The Artist, Intouchables, or Il y a longtemps que je t’aime.

I could probably expand on all of these topics above, but most of all when I think of France, I think of my husband and kids. We had a motorhome and now have a caravan and on our summer holidays we travel with it to countries that aren’t too far from the Netherlands. In the past 15 years we’ve travelled with it to Belgium, Germany, Austria, Denmark, Italy,  England, Czech Republic and yes, several times and most often to France! More specifically the northern areas of France, which are only a day’s drive away.

My son was two months old when we took him on his first summer holiday (in September). One of my most vivid memories of that holiday was that I was in the garden of painter Claude Monet’s house in Giverny (Normandy), sitting underneath a tree with my baby boy in my arms and he was staring up in wide eyed wonder at the leaves moving above him. We also bought a baby carrier so my husband and I could take turns carrying him against our chests.

Two years later in 2003, we were back in France, this time in the middle of the country, and I was expecting my second child. It was super hot that summer, I remember being so grateful for any air conditioned place or cathedral to enter where it was nice and cool. Being pregnant and dealing with a heat wave is very uncomfortable! But we enjoyed ourselves and my 2 year old son loved running around everywhere and climbing all the stairs he could find. 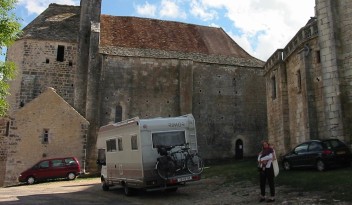 Another two years later (in 2005) we were back in France, this time in the Alsace Lorraine region…

And in 2008 we finally ‘did’ Paris with the kids. To the north of Paris, at an abbey, one of my favourite ever pictures of my kids with me was taken, where we were all 3 giggling uncontrollably. 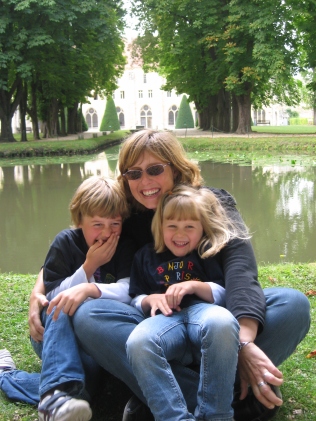 It took another 5 years to get back to France again. This time, in 2013, we did the Champagne region. 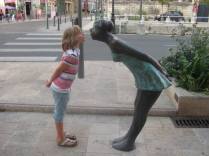 And the next year, 2014, we were back again, this time for Verdun, the Somme and surrounding areas. It was a very WWI themed holiday, we saw remnants of trenches and of course graves…

When I look at all these France pictures, I just see the kids growing up right in front of me, right here on my laptop! They are growing so fast and when I think of France, I think of us a family a lot. Not too bad an association, right?