The new Mach’ was challenge is to do something with a children’s book. Immediately I thought of The Littlest Angel, a children’s book I have owned from when I was 6 years old. My The Slipper and the Rose book also came to mind, but I think I got that one a little later. So, The Littlest Angel by Charles Tazewell it is. It’s become a little tattered over the years and as a child I even traced over the letters in the word “Angel” on the cover.

I know I’ve had this children’s book from when I was 6 years old because the book has an inscription for me written by my mother. 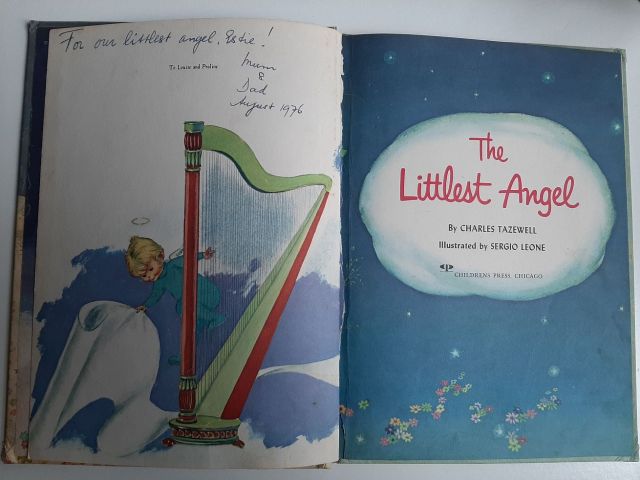 Only looking at it now do I realize that the illustrator is named Sergio Leone! I don’t think it’s the Sergio Leone, the director of those famous Westerns. I’ve been trying to research it online for a bit but all I can find to connect the two Sergios is this blog post about a ‘same name syndrome’. That author also thinks these are two different men.

Anyway, The Littlest Angel used to be a favourite book of mine, otherwise I wouldn’t have kept it so carefully all these years. However, I don’t think I’ve actually read it since my childhood! It has moved with me from Israel where it was gifted to me, to three addresses in Germany, to five addresses in The Netherlands. Well, maybe four, I don’t think I took it with me to boarding school in The Netherlands. Recently, we set up new bookshelves in our living room and many of “my” books were transferred from the large shelves to the new ones. The Littlest Angel moved to the top shelf on the left, bottom of the pile, and it was the first time I had actually held the book and looked into it in years! 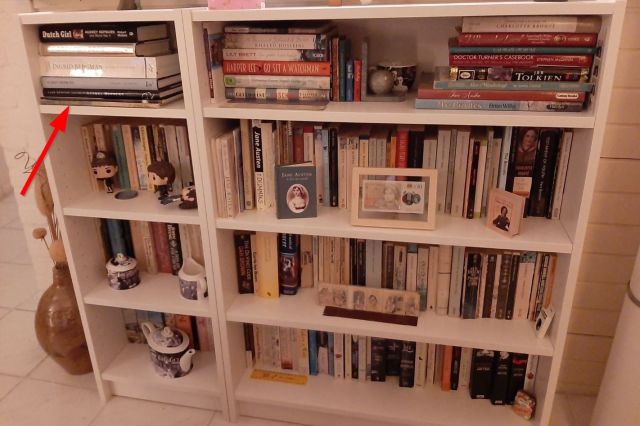 The book is a very Christian Christmas story (not that I remember noticing that at the time) and is about a little angel, 4 and a half years old, who presents himself at the gates of heaven.

I’m not sure I can post all the pictures I took of this book (you know, copyright and all) but the story is about this little angel not quite fitting in. His whistle is too loud and disturbs the “Patriarch prophets”, he sings off-key thus disturbing the ethereal sound of the celestial choirs, he has trouble flying with his tiny wings and he can’t keep his little halo in check: “However, owing to the regrettable fact that he always forgot to move his wings, the Littlest Angel always fell head over halo!”. I used to love the images of paths in between the clouds and the little angel chasing after his halo. 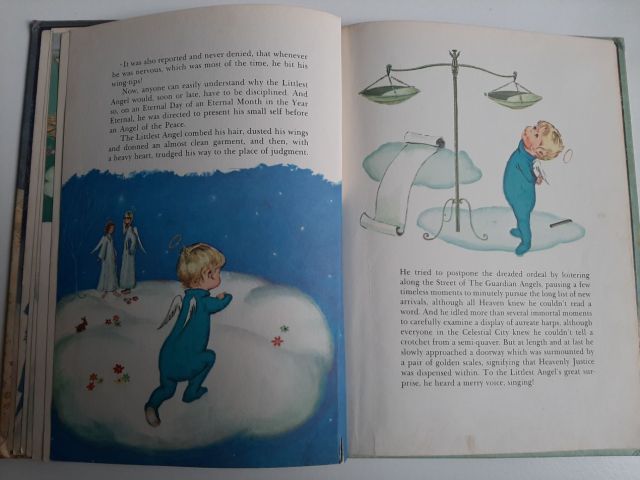 He gets to the Understanding Angel, immediately feels at ease, and tells the Understanding Angel that he’s a little bored and longs for a box he used to have under his bed which contains his earthly treasures. It is brought to him and he is happy. Then the time comes that the Christ Child is to be born and each angel has to pick a gift to give the Child. The Littlest Angel tries to figure out what to do. 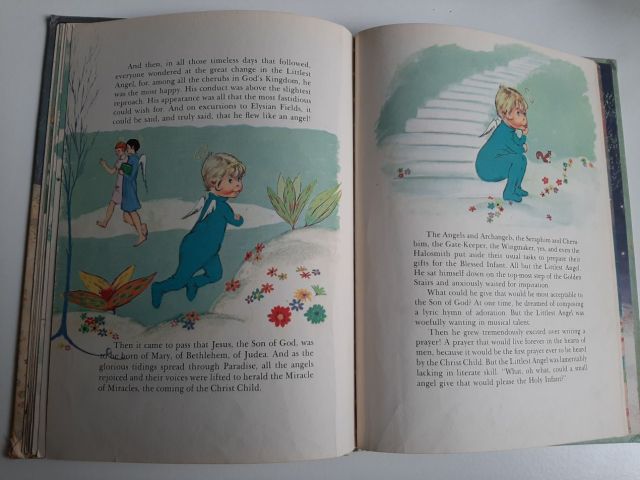 In the end he decides to gift his little box to the Christ Child but he also starts to feel embarrassed and inadequate because his gift isn’t as beautiful and glorious as all the other gifts. Oh wonder of wonders, the Hand of God in the end decides to pick that little brown box as the main gift for the Christ Child. It contains ordinary, child treasures, such as “a butterfly with golden wings, captured one bright summer on the hills above Jerusalem, and a sky-blue egg from a bird’s nest in the olive tree that stood to shade at his mother’s kitchen door.” Seeing that I was living right outside Jerusalem at the time I read this book, in a village in the Jerusalem hills, and there were indeed more than enough olive trees to be found, I could completely picture all of this in my mind’s eye. 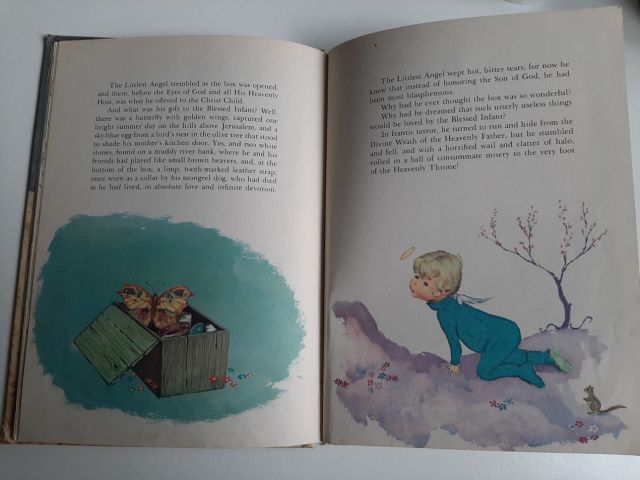 The little box gets lifted up into the heavens, it starts to glow, and ends up being the Star of Bethlehem, shining over Jesus’  crib. 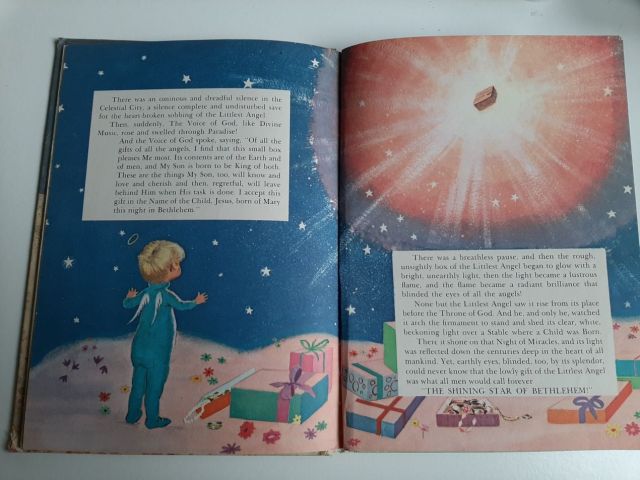 At the end of the book, you  can really see how tattered it’s becoming. It is, however, still in one piece, so that’s something!

While I did remember large chunks of the story, I didn’t remember the end part. Maybe even then I thought the whole box as a Star of Bethlehem thing was a little far-fetched and tended to skip that part? What I mostly remember is that I liked it being about a little bit of a naughty angel who did his own thing and I liked the image of what life in heaven, up there on the clouds, must be like. I also had this image in my head of these angels sliding down to earth on a rainbow slide to paint the flowers and then later watering the plants with little watering cans from the skies, thus making it rain on earth. That must have been from another angel book, though, which I think I must now go in search of. My mum was always into angels, so has all kinds of angels throughout her house (like the ones in the pictures below). My kids even call her “Oma Engel”  (Grandma Angel), so it’s no wonder I had all these angel books growing up. 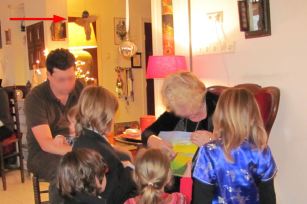 How fun that this Mach’ was challenge made me travel down memory lane and read that book again for the first time in 37-40 years or so! Thank you Herba and Die Pö.

7 thoughts on “The Littlest Angel”