My friend came over yesterday evening to stay up all night with me to watch the Oscars, as we do together every year (and we always take the Monday off work afterwards). We watched and I needed to blog about it, which also incidentally ties in perfectly to Herba’s and Pö’s next ‘Mach Was’ challenge that was announced yesterday: do something with awards! So, here goes: with my own fake Oscar that I have owned for many years and something to nibble and drinks, we were ready to watch the Oscars show…

First the red carpet, of course, which we were able to see through Eonline on my TV. The kids have the week off school this week and were going to watch with us but gave up during the red carpet before the awards show even started (for us it starts at 2 am). There were some nice and not so nice outfits on the red carpet, my friend and I tended to not like the overfluffed dresses. There’s a whole overview HERE if you want to take a gander. My friend’s heart stopped dead for a moment when she spotted Jason Momoa on the red carpet. She has always liked him, I think now she’s in love. He did look wonderful with wife Lisa Bonet by his side…

The show itself was alright but a bit boring for most of it. Queen opening the Oscars was pretty cool, though:

… and the 3 ladies (Maya Rudolph, Tina Fey and Amy Poehler) opening the show were quite fun. Maybe they should headline the Oscars show next year!

Regina King quickly won Best Supporting Actress and then a load of other awards, more technical and costume and such, followed. The speeches and most of the show were a little dull, though. Lots of tears too. Anyway, my friend took a few pictures off the TV screen of some of the presenters during the evening… 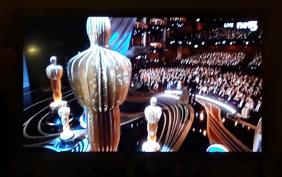 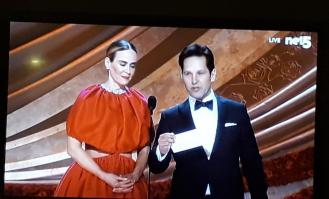 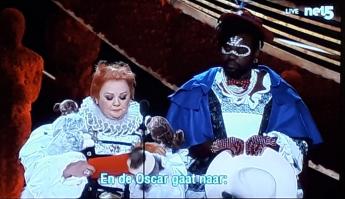 We both like James McAvoy and Paul Rudd; Melissa McCarthy very much amused us in that over the top outfit she wore to present costume awards. A big highlight for us was seeing Bradley Cooper and Lady Gaga perform “Shallow” together. When this moment happened (another picture taken off my TV screen), our hearts completely melted:

Here is that performance in full on YouTube, we found it mesmerizing. I know Lady Gaga has a good voice, but boy, does Bradley sound good too! 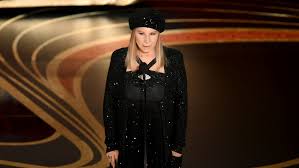 Richard E. Grant has been gleefully joyful about his Oscar nomination. Watching his Twitter feed in recent weeks has been an absolute delight. He has been gushing about being a Streisand fan since the age of 14 and when he finally saw her live on stage, the camera showed his ‘Wow’ and it was just endearing!

In the past two hours, as I type this, he has also chronicled meeting Streisand after the show for real:

Being Oscar nominated was pretty amazing, but meeting with @barbrastreisand and having a proper conversation was an absolute astonishment. 40 carat Gold 🌟🌟🌟🌟🌟🌟🌟🌟🌟🌟🌟🌟🌟 pic.twitter.com/7ahBzdjg9j

There’s even a selfie, albeit a little blurry:

The true highlight for me came at the end, when Olivia Colman won Best Actress. I was rooting for her or Melissa McCarthy, I would also have liked to see Glenn Close win, but when Olivia won in the end, I was extremely happy!

Also, I just knew the speech would be fun…

… and how cool was it that she blew that raspberry! 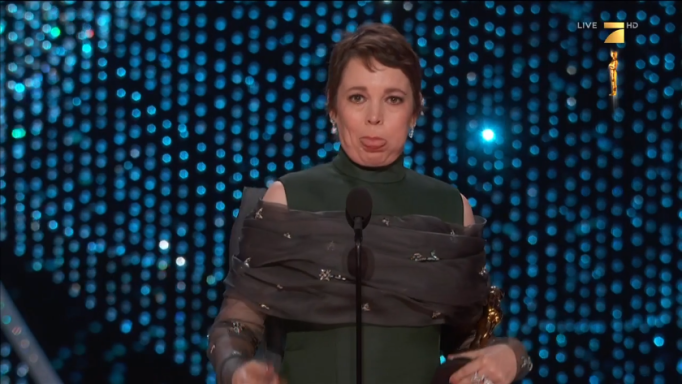 I have also just watched her press room appearance after the show, and there too she is just as adorable:

So, what do I think of the winners? I like that there was not one movie sweeping up all the Oscars. Also, I’m fine with most of the acting awards. I would have preferred a Richard E. Grant win for Supporting Actor but I also really like Mahershala Ali, so was fine with him winning. I was happy with Regina King also, only Rami Malek was a bit of a disappointment to me. I would have preferred to see Bradley Cooper win, I thought he gave a phenomenal performance in A Star is Born.

Also, one day I truly want to see Amy Adams win that Oscar! After 6 nominations, it’s time. I didn’t think Vice was the one she should win it for, but it’s time. I would have given her the Oscar for Arrival. She wasn’t nominated for it that year but she should have been and would have been a much more worthy winner than Emma Stone for La La Land (such an overrated film!), in my humble opinion. 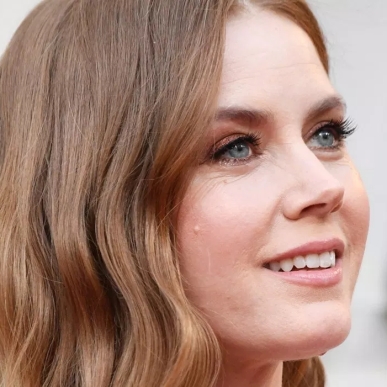 As for Green Book winning Best Picture? I quite liked the movie, but to me it wasn’t Best Picture worthy. From the list of nominees I only haven’t seen Roma and BlacKKKlansman yet, and I have a sneaking suspicion that one of those two (especially BlacKKKlansman) would have been a better choice. That or Can You Ever Forgive Me, if it had been nominated, would have been a better win for me.

So, all in all, this was not the most exciting Oscars in the books. Due to there not being any host for the evening, it all felt a little rushed. That was good (made the show seem less endless) and bad at the same time. Part of the fun of watching the Oscars is enjoying, or taking the mickey out of, the main host. Usually, my friend and I get to bed after the Oscars at around 6 am, this time we went to bed at around 5.15 am. Even if I was a little underwhelmed with the whole show, there were some little gem highlights that I think I will remember very fondly for a while (Olivia, Bradley & Gaga, and Richard & Barbra) So, even though I’m tired now, being up all night for this wasn’t a waste. 🙂