Last weekend I went to another one-day film festival at one of the large Pathé cinemas here in the Netherlands. The PAC (Pathé Alternative Cinema) festival is held twice a year and I try to get to at least one of these each year. My friend and I went last Sunday. The line-up was as follows (and as of yesterday, 4 of the 5 movies here have garnered Oscar nominations!): 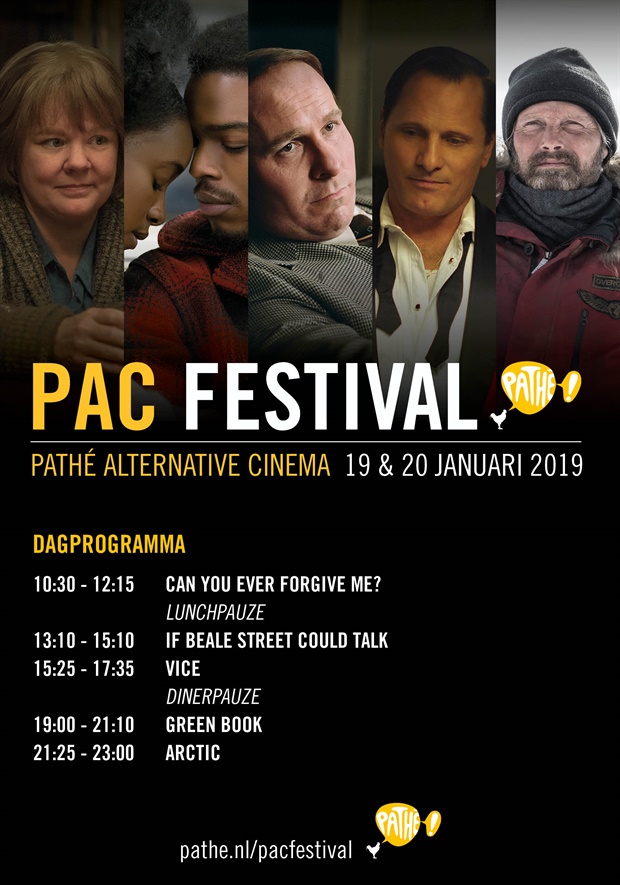 I’m not going to go into detailed descriptions and criticisms of each movie, just giving quick impressions of what these movies did for me. I can tell you straight off that I liked all of them (yes, even Green Book!) but that I think my fave of all these 5 movies was the first one called Can You Ever Forgive Me?

Can You Ever Forgive Me? is the true story of an author who has fallen on hard times and by chance discovers that faking letters from famous authors can earn her a lot of money.

I loved the story and I loved the character of Lee Israel; Melissa McCarthy portrayed her beautifully. I loved seeing a character in a lead role who isn’t all skinny and pretty (although I do find, and have always found, Melissa McCarthy to be pretty and cute), someone who seems dowdy, caustic and even unlikable. She is someone who is pretty much invisible to the world around her and yet, she is so rich on the inside and yes, despite her flaws and sarcasm, she is lovable, maybe because of the very real struggles she is facing. Also, anyone who loves their cat as Lee Israel does has something good in them, regardless. 😉 Richard E. Grant plays Jack Hock, someone who is down on his luck as well and becomes her best friend and he too plays this role beautifully. What I liked most of all was that these characters are layered, they aren’t all good or all bad, they are all only human. What seems drab and maybe even evil on the outside isn’t necessarily all that on the inside.

I was tickled pink to discover that both Melissa McCarthy and Richard E. Grant have been nominated for Oscars for their roles. They so deserve it!

Next up was the movie If Beale Street Could Talk. It’s about a young African-American couple who are in love. After Tish’s (Kiki Layne) fiancé Fonny (Stephen James) is unjustly arrested, she looks back on their relationship and does everything in her power to get him released. The two young lead actors beautifully portrayed their characters. They were so gentle and sweet, very poetic in a way. I loved Tish, such a sweet, open and innocent face, starting out grown up life in such difficult circumstances…

… and I loved Regina King who plays Tish’s mom. She almost stole the movie for me. She too has been deservedly nominated for an Oscar. 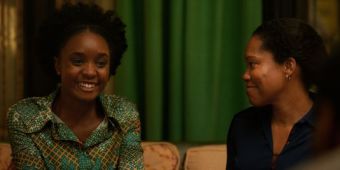 The film was almost other-worldly, dreamlike, and felt very poetic. That also made it quite a slow movie, almost too slow. My friend even nodded off for a bit there. I loved the feeling of goodness trying to overcome evil and prejudice in this film and I liked that the ending wasn’t glossed over happy, but the movie was too slow in parts and so for that, I can’t give it the highest marks. It did feel very topical and gives food for thought, though, which is always excellent.

The next movie we saw was Vice. It’s a comedy-drama film, dripping with sarcasm, about Dick Cheney who was the former vice-president under George W. Bush. Cheney is played by Christian Bale whom you hardly recognize as Bale. He is excellent in the role… 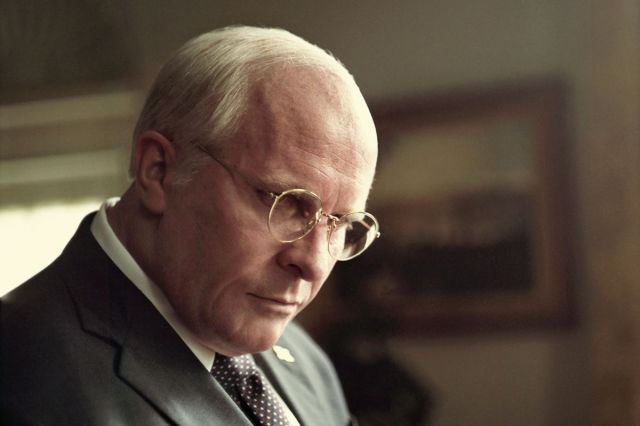 … as is Amy Adams in her role as his wife Lynne.

While I was very aware of George W. Bush as president (and truly hated his presidency), I only recalled Dick Cheney by name. I knew virtually nothing about the man, other than that he had been vice-president and that he had been Secretary of Defense under papa Bush, where he pushed for a war on Iraq on what I recall as flimsy or even false evidence. The film is very polarizing, I can imagine Democrats in the US loving this and Republicans hating this and after seeing this I still don’t know what’s really true or not. I tend to believe he must have been a sleaze, as I also truly hated the George W. Bush presidency and from the beginning felt the war on Iraq was more about oil than about Al Qaeda or Saddam Hussein, but I don’t know if this movie does justice to Cheney or not. The movie clearly does state that they are not sure everything played out as they show it, and even have someone during the end credits claim the movie is liberal bullshit, which I thought was a very nice touch. Regardless of how polarized it is, the sarcasm made me laugh at times and I especially loved the scene between Dick and Lynne in their bedroom, doing a Shakespearean dialogue. That alone is Oscar-worthy. And yes, these two actors have also been nominated for Oscars! So, yes, I did like the movie, even though I was very aware of it being a one-sided, liberal stand-up show which also had some surprising twists and turns. My friend isn’t so much into politics, especially not US politics, and didn’t like it so much. Some of it went over her head, I think, as I think it did to a lot of the Dutch audience. I was laughing in places where I noticed no one else around me laughing… So, I’m thinking this movie works best in the US and for people who are interested in politics.

After this came Green Book, which I was very curious about after having read Servetus’s criticism of it. I really like both Viggo Mortensen and Mahershala Ali and the story interested me too. Mahershala Ali plays classical pianist Dr. Don Shirley, who is doing a tour in the Deep South of the US in the early 1960s and hires Italian Tony “Lip” Vallelonga to be his driver.

I get the criticism of the film, and especially the fried chicken running joke felt off, and for a while there the idea of Tony ‘educating’ Don on what black people should like felt off as well. But I also saw this movie as a story mostly about Tony who has to face his prejudice against African-Americans and through actually becoming friends with an African-American, learns the error of his ways. This movie is mostly aimed at a white audience, I think, but is it really so bad to address this from a white point of view? To me African-American Don felt in no way inferior to Italian-American Tony and it was nice seeing the African-American character as the eclectic, more-cultured and learned man. He was the main educator to me, rather than the white man. Yeah, Tony tried to ‘teach’ Don about African-American music and about letting other people in, but in the end the lessons Tony learned from Don where more profound than the other way around. Not only the lesson of racism but also the lesson of learning to express yourself more eloquently, the importance of dignity and learning that not all African-Americans love the same things. Don didn’t need to change so much, except for maybe letting people in a little bit more, Tony did need to change and this was mostly Tony’s story. I’m sure there was stereotyping of African-Americans in this, but I have a feeling there was Italian-American stereotyping as well. Maybe I’m missing nuances here but from an outsider’s point of view on racism in the US, this to me didn’t feel so very biased against African-Americans. It was not a very surprising movie, however, and did feel a bit like a story that has been told before. It also never really dug deep into the psyche of these two men, it remained a little shallow overall. So, in that sense, this wasn’t the best movie of the day for me. It was pretty enough but lacked depth. Viggo and Mahershala have both also been Oscar nominated for this and while I thought Viggo did really well (and I would be happy for him to win, though maybe not for this role), I liked Mahershala even more. He’s up in the same category as Richard E. Grant for the Oscars, it’ll be a tough call. Although, in hindsight, maybe it isn’t so tough, as I think the depth of Richard’s character was more developed than the depth of Mahershala’s.

The final film of the evening was Arctic starring Mads Mikkelsen, he of Hannibal fame to Richard Armitage fans.

It’s a movie about a man surviving on his own after his plane crashes in the Arctic. You don’t see the crash, you just have this story of this one man trying to survive. At first he stays put but when he rescues an unconscious woman from a helicopter crash (a team of pilots who tried to save him had crash landed) he decides he needs to move and find safetly with her in tow, pretty much unconscious for the whole movie. Not much dialogue and a lot of hardships are endured and yet it still was a good watch. Again, like Green Book, it wasn’t the most surprising movie, especially not after having seen The Mountain Between Us a year or so ago with Kate Winslet and Idris Elba also trying to survive such a freezer climate together (although Kate is not unconscious for too long). Still, it was never dull, the story moved along nicely and my friend, although it was the last movie of the day, never once dropped off to sleep. 🙂

All in all, I enjoyed all the films and some more than others. If I had to put it in order from fave to least fave of the day, the list would be: