I see that it’s been nearly two weeks since my last post! Yikes! When that happens, either ‘real life’ becomes overwhelmingly busy or I shut myself off to indulge in my latest passion. My sabbatical these past two weeks is due to the latter: I have become completely engrossed in the tv-series Suits!

I have been aware of Suits for quite a few years but it’s about corporate law and I thought that wouldn’t interest me, so I let it go. To be clear, corporate law will never be a passion, but this series has something special! The story is centered around hot-shot, cocky, know-it-all, ambitious corporate lawyer Harvey Specter (played by Gabriel Macht). He needs an associate and decides to hire a very talented, very smart college dropout called Mike Ross (played by Patrick J. Adams) as his law associate, despite Mike never actually having attended law school. The show focuses on Harvey and Mike as they solve cases and make deals while maintaining and containing Mike’s secret. 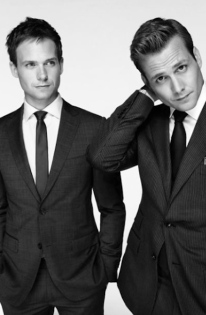 Surrounding Mike and Harvey is a strong cast of characters!

Lawyer Louis Litt (played by Rick Hoffman, on the left in this picture) is eccentric, quick-tempered, very flawed but also somehow endearing. He is a tough lawyer and vengeful, not easy to get along with (he and Harvey have a very contentious relationship) but underneath he is a softie. He adores ‘mudding’ (i.e. mud baths) and cats.

Jessica Pearson (played by Gina Torres, on the right in the picture above) is the head of the New York City law firm. She is cool and calculated, has made every sacrifice possible to make it to the top, but always has the firm’s and her people’s backs in times of crises. You do not want to mess with her, though. She’s a real kick-ass boss!

Then we have Donna Paulsen (played by Sarah Rafferty, 2nd from left). She’s Harvey’s power personal assistant / secretary. Very quick-witted, knows everything that’s going on anywhere and has been with Harvey for many years (he took her with him when he transferred from the DA’s office to the law firm). Theirs is a very close-knit relationship. When in a flashback scene he becomes partner, he tells Donna that “we” have become partner. He depends on her completely and while their friendship is very close in a brother/sister kind of way, there is also the necessary tension and a big ‘will they, won’t they’ quality. When at some point, after a crisis, she leaves his desk to work for Louis, Harvey is totally unhinged for a while.

Harvey is a man who loves life in the fast lane. He is intent on keeping emotion out of business as emotion makes you ‘weak’. He is slick, easy on the eyes, popular with women, loves a nice car, his basketball trophies in his office from clients he has and his record collection. He is also called ‘the closer’ as he is so good at closing deals, he is tough and almost unapproachable on the outside but, if you look more closely, there is a heart hidden inside him which becomes more and more apparent as the series progresses.

Mike is the fake-lawyer. Young, extremely smart, a bit of a happy-go-lucky kinda guy, who is very good-hearted but skirts around legal edges all the time. He has a real desire to do good in the world. Through bad luck and some bad choices he has never been able to go to law school, even though he knows every law textbook by heart (he has a photographic memory). He almost instantly falls in love with Rachel Zane (played by Meghan Markle. Yes, her of Prince-Harry’s-girlfriend fame). Rachel has trouble passing the entrance exam for law school (the LSAT test), not for lack of smarts but because of nerves. She is stuck as a paralegal at the firm. She eventually passes the exam, with mentoring from Mike, and can finally start law school, her paralegal experience coming in handy. It takes two seasons for Mike and Rachel to get together, their relationship really is a lovely one. They are true partners for each other, they live together and are engaged but not married yet.

The world of corporate law is a total alien one to me.  This series is basically about rich people and their firms wanting to be richer. It’s a fast-paced, back-stabbing world, where the right deal with the right amount of compensation is the most important thing. I can imagine Donald Trump being client number one at this law firm. It’s not a world I particularly like, especially in this day and age when you see that millionaires can buy anything, even a presidency, with the right money and people/deals backing them up.

And yet… Suits is addictive and I am not sure why! Maybe it’s because I want to understand that world better? Maybe because it shows that even in that world, so far away from mine, the people are given a human face. If I met Harvey Specter in real life, I think I’d recoil from him and even find him a little scary. Yet, there is a man with a heart in the right place underneath it all that makes me actually really like him! With him, it’s all in the eyes and I admit, I find that very sexy. Jessica, the boss at the law firm, would make me feel intimidated as well, she is not a woman to be messed with. Even Donna could intimidate me, although her heart is more readily shown and she is a lot of fun. Mike and Rachel are the most easily accessible characters in this, they are people I could imagine being friends with in real life.

What also really attracts me is that the women here are strong and the cast is diverse (even the guest cast is diverse). It’s not just white rich men in corporate New York City. Louis is Jewish and in a hilarious scene when you see him meeting his Austrian therapist, he goes all anti-Nazi on him without knowing anything about who this man with the German accent even is. Rachel (just like Meghan Markle in real life) has a black and a white parent. Her black father heads a rival law firm and her white mom is shown on occasion as well (in real life, Markle has a black mom and a white dad). The head of the firm, Jessica, is black and a woman (sadly, she is leaving the show!) and even the latest addition to the core team, secretary Gretchen Bodinski (played by Aloma Wright) who is hired on the spot by Harvey, is absolutely awesome! I love her character, she started in season 5, and I hope they’ll use her even more in the future. 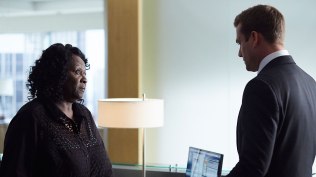 I had been meaning to try an episode of Suits for a very long time as I heard good things about it. I even remember considering buying the first season DVD a long time ago when I saw it in a shop. But… it was about the corporate law world which could never quite pull me over the edge, so I let it be. Then, a few weeks ago, I was reading some blurb about Meghan Markle which mentioned Suits and when I logged onto Netflix that same day, I saw that the first 5 seasons were on there (the first series has 12 episodes, the rest have 16 episodes each), so I gave it a shot! And I haven’t regretted a single moment…

I couldn’t stop watching after 5 seasons, I HAD to know how it continued, so I found ways to watch season 6 and season 7 so far as well! It is still unsure whether there will be a season 8 and whether Meghan Markle will even be a part of that if there were to be an 8th season. I can’t imagine Suits without her… So, if she does happen to end up marrying Prince Harry, I really think she should be allowed to continue acting as well. After all, she’ll never be queen anyhow, she can live a more free life, I hope? Time will tell.

In any case, the series is on a hiatus right now. There was a mid-season finale a few weeks ago which ended on a huge cliffhanger for Donna & Harvey (will they??? won’t they???) and already I’m finding it almost unbearable to wait for the last 6 episodes of season 7 to air at the beginning of next year. Apparently, those last 6 episodes are being filmed now as we speak.

When I get obsessed, like right now with Donna & Harvey (called Darvey to shippers), it gets my creative juices flowing. I’m thinking of a fanfic right now and of course, I needed to make a video as well… But, I just don’t have the time to source video clips. Binge-watching in itself is already so time-consuming and it’s time to enter the ‘real world’ again, I can’t stay hidden away forever. I have been saving a lot of Darvey gifs to my laptop of late and suddenly had the brain-wave to make a video using those gifs! So, that’s what I’ve been working on recently. The quality of the images is not great (they are gifs, after all, and not real video clips), but it gets the message across. So, here is the end result…

So, now that I have all of this out of my system, maybe I can make room for other things again?… Yeah… right… nope, not quite ready yet to move on… I do think I need to maybe read just a few more fanfics and watch a few more videos… Ugh, bingeing is exhausting (I stay up too late!) yet so much fun!