Continuing the Richard Armitage challenge from here that Guylty has set; questions 9 to 16… 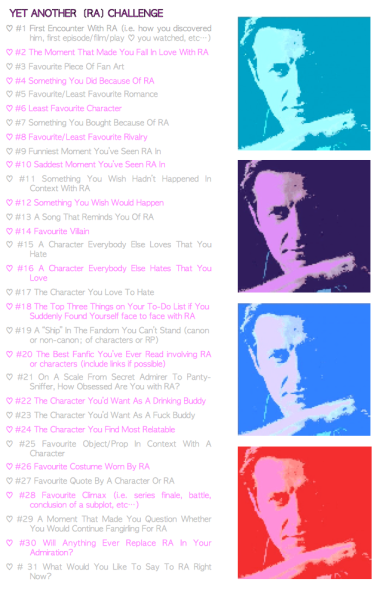 #9 Funniest moment you have seen RA in

There are many, small, funny moments and I especially love it when Richard giggles or he is in stitches. In the acting department, I loved seeing him on The Vicar of Dibley. His role was pretty straight compared to the other characters there and not really ‘deep’ but the show makes me laugh so very hard, I was just thrilled he was a part of that. I absolutely adored the proposal scene! Alas, I can’t find a clip of that scene online, but I could just watch it forever!

I also laughed so very hard at this little Strike Back scene:

There are many priceless (behind-the-scenes) moments and interviews but the first thing that springs to mind of real-life Richard are the two Cinemax interviews where Martin Freeman interviews Richard and vice versa.

#10 Saddest moment you have seen RA in

Thorin’s death in the last Hobbit movie. I know Richard has died often enough in other things, but this one really tugged at me. Powerful, heartbreaking scene that made me cry and still gets to me when I watch it again…

#11 Something you wish hadn’t happened in context with RA

I don’t really have many things I wish he hadn’t done. I may not agree with all he does but usually I can let the more bothersome things slide. Live and let live and all that. Having said that, I do get annoyed with his tweeting and deleting. I know it’s his Twitter and his right and all, but it’s annoying and confusing when it happens so much and I really don’t like it.

The other thing that comes to mind is that second Anglophile Channel interview he did. I enjoyed the first one (plenty of adorable giggles in it!) but that second one, the interviewer made me cringe so very much, I just wished he hadn’t done it… Not linking to it here, I just can’t watch it…

#12 Something you wish would happen

I don’t have the need to see Richard do any specific kind of role, he has challenged me with some roles he has chosen and I like that! Of course, I wouldn’t mind another romantic hero but no, my wishes are not for certain roles. What I do wish for fervently is that Sleepwalker, Urban and the Shed Crew, Brain on Fire and Pilgrimage would become widely available to audiences everywhere so that I too can see them! For Pilgrimage I have hopes of a wider release and Brain on Fire is supposed to go to Netflix, but where is it already? Basically I hate when my fave actor makes things that I can’t see. I also wish Love, Love, Love had been filmed and I wish for him to return to the London stage! Oh, and he’s always welcome to come spend a weekend at my house! 🙂

I have 3 songs that immediately spring to mind! The first one is Justin Timberlake’s Sexy Back due to a fan video I saw way back when in my early fan days that became very popular! I didn’t know this song before I saw that video and I immediately found it very fitting; the video made me laugh. I always loved the first one most, maybe because it’s the first one I saw, but HeathDances later made two more Sexy Back videos, which are also good.

Also, songs used for other fan videos (see my #3 answer in my previous RA challenge post) always make me think of Richard as well.

The second song I want to mention is the Misty Mountains song that Richard himself sang in the first Hobbit movie. Still gives me goosebumps when Richard starts singing… I had it as my phone ringtone for a while but even at its loudest I wouldn’t always hear it properly when the phone was in my bag, so I recently changed the ringtone again. Nevertheless, I love hearing Richard sing this!

And the third song is Muse’s Starlight. Richard referenced my fave band Muse in his birthday tweet last year and I was incredibly stoked when he did. Now, when I listen to Starlight (or to Butterflies and Hurricanes which he referenced a few months later in an interview), I have the added bonus that it now also reminds me of Richard!

Surprisingly Francis Dolarhyde!! I do not to horror well at all, avoid it all cost if I can. So, when Richard got this horror-part, I wasn’t sure I could deal with it. I was always going to watch it but I was determined to feel no sympathy whatsoever for such an evil serial killer. And then Richard pulled off the impossible – he made me feel sympathy for Francis! Very well done, Richard!

#15 A character everybody else loves that you hate 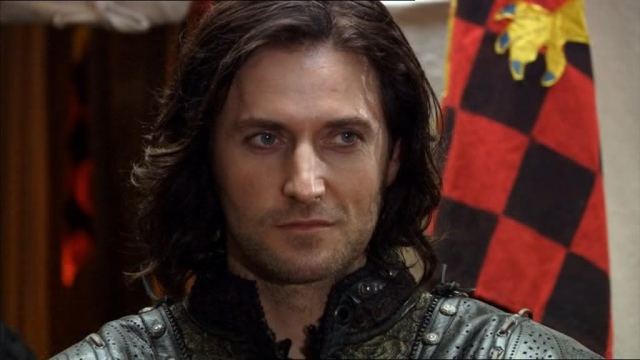 I mean, Richard did good, I really do think that, and I don’t hate Guy, but he just doesn’t do that much for me… Maybe it was the guy-liner that was too distracting?

#16 A character everbody else hates that you love

I’m racking my brain here. Richard has played some hateful characters and I can’t say I love any of them. Maybe the answer to this is Francis Dolarhyde? He’s a difficult one to watch and I know there are fans out there who have never been able to even attempt watching him, which I can totally understand. While I can not love Francis Dolarhyde by any stretch of the imagination, he is the one that surprised me and unexpectedly made me feel sympathy (as I already mentioned above). So, I guess that would be my answer to this.

That’s it! More next week, hopefully!