The BBC showed a TV film called “The Eichmann Show” the other night and I have just watched it. It stars Martin Freeman (as producer Milton Fruchtman) and Anthony LaPaglia (as director Leo Hurwitz) and tells the story of how the trial of Nazi Adolf Eichmann was brought to television screens in 1961. 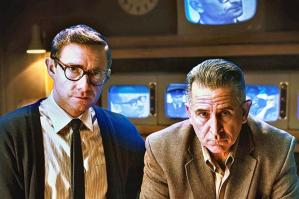 Martin Freeman was a bonus attraction but the real attraction to watch this was the topic. I have a history with the topic.

I was born In Jerusalem, spent my childhood there. From the garden of our house in the village we lived in outside Jerusalem we looked out over a valley and at the other side of the valley stands Yad Vashem, the museum in Israel that shows the horrors of the Holocaust. I’m not sure if it is my later knowledge playing tricks on me or whether it was really so, but I always imagine that from my bedroom window I was able to see the reddish train car that is on display there outside the museum. Ever since I can remember, stories of the Holocaust were around. Our neighbor upstairs was a Holocaust survivor with a tattooed number on her arm (that we were never allowed to ask anything about). I remember being fascinated by this mystery of the Holocaust, I knew terrible things had happened but was sheltered from exactly what. When people said they had been to Yad Vashem and how sobering that had been, I wanted to go as well, especially as we lived quite close to it, but I was never allowed to as I was deemed too young. I finally did visit, years later, but not in my childhood when we lived there.

We then moved to Germany where at the time the Holocaust was more of a distant memory. I remember that just after we moved there, German TV showed this TV mini series called “Holocaust”. It was not the first airing but a repeat but I remember that the showing was relatively new. It had opened up a big can of worms and the Holocaust became a big point of discussion in Germany. See the “Reception” section in wikipedia’s entry about this series where the reactions in Germany are also described: http://en.wikipedia.org/wiki/Holocaust_(miniseries). For me too, it was an introduction to the Holocaust. I was allowed to watch it with my parents and I could finally see what the topic I had heard so much about really was about. I remember being devastated and upset and talking with my parents a lot. I wanted to understand how families of my friends in school could have been involved in such a thing! Or were they even involved? And what really happened? And how many Germans went along with it and how many stood up against it? The Germans I knew were nothing like the Nazis… it started a whole fascination of this topic for me. I read everything I could, about the horrific things that had happened, how it had come to pass, everything. I wasn’t taught anything about the recent German history in school so I had to figure it all out myself. At 13 I read the Diary of Anne Frank, about a girl in Holland (where my family was from!) and decided to write a diary as well.

Many years later, at the age of 19, I went on a German-US study trip with German students (and me) and American Jews. We first went to the US to study about the Holocaust and to study Judaism, we then went to Poland and visited Auschwitz and after that we went to Berlin (it was the summer before the Berlin Wall fell – I returned there 3 or 4 weeks after the Wall had fallen, which was an eery experience and is a story in itself). The trip was emotionally exhausting, relationships between the Americans and the Germans were sometimes strained and I was caught in the middle sometimes but the trip was also extremely enriching at the same time.

I was obsessed with the topic (at some times more than at other times) for many years. I remember when I was pregnant with my son that my husband forbade me to read or watch anything to do with the Holocaust as I was having nightmares about trying to hide my baby in the attic from the evil Gestapo. And yet, after all that study, I never felt I have ever really been able to wrap my mind around what happened in the Third Reich. And if I didn’t understand it well enough, how could I prevent myself from falling into such a blind hatred over something that would cause me to lose my humanity? I closed myself off from it for a while, I had to. Films like Sophie’s Choice and Schindler’s List I have seen once, maybe twice, and although they are excellent films I cannot bring myself to watch them again. I am never going to understand it all, not really, and so I have made my peace with that and let it go for the most part.

And then sometimes, something comes on TV and I am caught again… and this is what happened with “The Eichmann Show” that I just watched. Leo Hurwitz, the director of the Eichmann trial TV registration, is fascinated by Adolf Eichmann. His one goal is to find a crack, a humanity, a morsel of guilt or remorse in Eichmann. Leo Hurwitz… I am him in a way! Trying to wrap my mind around it, trying to understand how it ever could go so far. He believes every human, in the right (well, wrong, really) circumstances, is capable of such attrocity and that at some point they will crack and show remorse. Eichmann never did, he remained icy cold and tight lipped throughout the trial and showed no feelling whatsoever. What does this tell you about humanity? What does this tell you about hatred? I am yet again confronted with these questions and I fear I will never ever understand. I wish they had not used the death penalty on these war criminals at the time, that way there was never going to be a chance to learn what made them do what they did… It’s the same regret I feel about those terrorists in France being killed – how can we ever hope to find any answers to why people do these things if they all get killed? Lock them up and keep asking them questions, over and over again during their life imprisonment, and maybe there is a hope that they will regret and we can learn to understand?

Too many thoughts twirling in my brain now. If you’re interested, here’s a good article from The Guardian about this TV film: http://www.theguardian.com/world/2015/jan/11/exposing-adolf-eichmann. I’d recommend the film to anyone… but then again that may also be my bias towards the topic talking.

1.30 am in the morning! Now I have written about it, maybe I can finally let my mind rest and get some sleep (I have to be up again in 6 hours…)

4 thoughts on “The Eichmann Show”